My solving time was 9 minutes for all but 1ac, which after a further 5 I abandoned hope and resorted to aids as I knew it was a word I would never come up with from the definition and I was getting nowhere with any element of the wordplay. It turned out to be one of two answers where I wondered about their suitability for a Quick Cryptic but we all need to be stretched occasionally or we never learn anything new.

A very pleasant start to the week of crosswords, with a little bit for everyone, especially, perhaps, the astronomer. A particularly good two-word clue, I thought.

'Unprincipled men are useful, enabling those who have more scruples to keep their hands tolerably clean in a world where there is much dirty work to be done.' (Romola, George Eliot). Just one punchy statement out of many in this rather good historical novel from 1863. Plus ça change...

1 Ghost finally vanishes, joining a series of shades (7)
SPECTRA - SPECTR[e] A
5 In less, I book transport (7)
MINIBUS - IB in MINUS
9 Usual memo recirculated was a great wonder (9)
MAUSOLEUM - anagram* of USUAL MEMO; the original Mausoleum was built for a chap called Mausolus (not to mention his sister-wife) in 350 BC in present day SW Turkey. It was the last surviving of the six destroyed wonders of the world, succumbing to earthquakes in the 12-15th centuries. The Great Pyramid of Giza is left to fly the flag.
10 Acceptable shape of neck with a top (5)
VALID - V A LID
11 Crudely hang sort of gate that nobody at first goes through (5)
LYNCH - a LYCH-gate is the roofed gateway to a churchyard, formerly used at burials for sheltering a coffin until the clergyman's arrival; lych (also lich) is an old word for corpse.
12 Nerve and wit I deployed in formal meeting (9)
INTERVIEW - NERVE WIT I*
14 Various relations had more children? (8,6)
EXTENDED FAMILY - if you have more children you extend your family
17 I’m surprised to see you describe Mercury (3,1,5,5)
ITS A SMALL WORLD - Mercury is nearly 20 times less massive than Earth, but big enough, I guess, to evade the fate of Pluto.
21 After dealing, saying one is meant to cut (6,3)
COPING SAW - COPING (dealing [with]) SAW (saying)
23 Person in office one playing rates (5)
TEMPI - TEMP (person in office) I (one)
24 Demanding to be beheaded: doing it? (5)
AXING - [t]AXING; a sort of all-in-one, I reckon
25 Great cheers and no end of criticism given to supporter (9)
FANTASTIC - FAN (supporter) TA (cheers) STIC[k] (no end of criticism)
26 Follows sailor? Sailor may follow this (7)
DOGSTAR - DOGS TAR; Sirius (AKA the Dog Star) is the brightest star in the night sky
27 Spare rooms at last given to uncle (7)
SLENDER - [room]S LENDER (uncle/pawnbroker)

1 Just succeeded, given hint (6)
SIMPLY - S IMPLY
2 Time of year when zebra almost mounts zebu? (7)
EQUINOX - EQUIN[e] OX; a zebra is a horsey thing, while a zebu is a humped cow
3 Perhaps needing plates inserted, without force (9)
TOOTHLESS - if you have no teeth left, you may need plates
4 From DNA remains, I reconstructed indigenous people (11)
AMERINDIANS - DNA REMAINS I*; according to Wikipedia, the term Amerindian (referring to indigenous peoples of the Americas) 'finds preferred use in scientific contexts and in Quebec, the Guianas and the English-speaking Caribbean'.
5 Half speak unintelligibly, keeping this quiet (3)
MUM - MUM[ble]
6 Resolve to move rook to the fifth? No way (5)
NEVER - NERVE with the R moved to last place
7 Artist changes one hand in capital, Ionic at the top (7)
BELLINI - the composer, not to be confused with the sculptor Bernini, as I usually do, when not inventing Berlini; BERLIN becomes BELLIN by changing R to l, then add I[onic]
8 Team methods not progressive (8)
SIDEWAYS - SIDE WAYS
13 Game, having drunk whiskey and other fluids (11)
TIDDLYWINKS - TIDDLY (drunk) W INKS
15 Turn to confront after an attack (5-4)
ABOUT-FACE - A BOUT (an attack) FACE (to confront)
16 Fish edge up — another fish died (8)
PILCHARD - LIP reversed CHAR D
18 Trying to remove minute little growth (7)
SAPLING - SA[m]PLING
19 Small child put in helmet, then put on cap (7)
LIMITED - MITE in LID; 'put on cap' as in 'limited/capped the budget'
20 Short, quick steps taken by one who prepares meat (6)
MINCER - A sort of amalgamated-double-definition/cryptic definition; the most famous mincer of the 1970s was Dick Emery's [TRIGGER WARNING] Clarence
22 Time out? (5)
NIGHT - a cryptic definition which relies on the 'unconscious' sense of 'out'. Very nice. My COD
25 It may fly in endless rage (3)
FUR - FUR[y]; it the fur flies, someone is not happy...
Today when viewing my QC blog I am seeing this between the end of the blog itself and the first comment. It's very annoying. Is everyone else seeing it too? Interestingly I don't see it on Ulaca's 15x15 blog when viewed on my PC but it's there on my tablet. 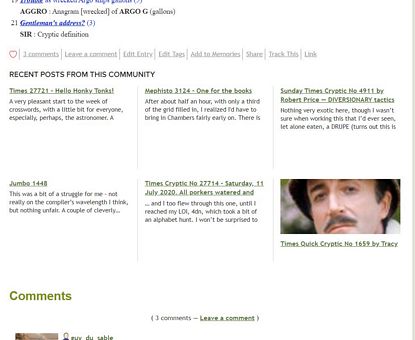