Add a few names, a fair few abbreviations and the odd composer then mix cleverly.

9 minutes for this enjoyable QC with a mind-blank on the two longer downs - 6 and 9.

Solving time: 36 minutes. This is my 450th blog of 15x15 puzzles - the first having been posted on 23rd November 2007. I remember sweating blood over the early ones but the process became much easier over time as I got used to what I was trying to do and difficulties with presentation and formating were resolved by the introduction of the template script. I'm not sure my solving times have improved a lot since those days but  I don't concern myself too much about that, quoting them mainly for the encouragment of slower solvers who might otherwise feel over-awed when seeing the times posted by our speed merchants. I found today's puzzle quite gentle.

Nobody has asked for it this time round, but undeterred I bring you an update of my analysis of QC difficulty levels by Setter. It's based entirely on my own solving times and whether or not I achieved my target of 10 minutes on any particular day. It's intended as a bit of fun and I am not suggesting for a moment that it would stand up to an objective statistical examination other than of my own failure rate, but when I published previously it proved to be of some interest. 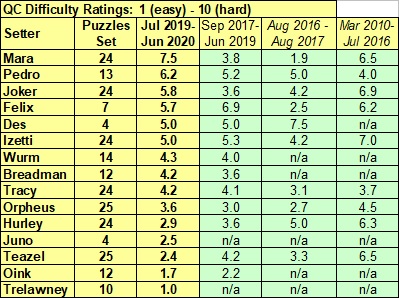 Once again the best cryptic workout of the month, because biffability has been all but subtracted from the equation - if you could readily define more than half a dozen of these words without resort to a dictionary, you're a better man than I am, Gunga Din. Interesting and experimental cluing is the icing on the cake.

I really really liked the surface for 26ac, but also have a soft spot having grown up on the wrong side of Offa's Dyke for 13ac. What tickled your fancies this month?

ACROSS
1 Wafer eaters forgoing starter, confused with tiny portions (8)
AZYMITES - {h}AZY [confused, minus its starter] + MITES [tiny portions]. An azymite is "a member of any church using unleavened bread in the Eucharist", if you want to drop it casually into conversation at some point.

6 Pop radio personality possibly a preener, according to tragic Prince (6)
PAJOCK - PA [pop] + JOCK [radio personality]. In Shakespeare's Hamlet, either (a) a peacock or (b) a misprint.

9 Once turned piles over (4)
SPAN - reversed NAPS. "Spun" is preferred these days, hence the "once".

11 Something from prompter, a nod, once, for toothless one that was giant in the wings (10)
PTERANODON - flying dinosaur hidden in {prom}PTER A NOD ON{ce}.

13 John Wyclif has this divine inspiration symmetrically arranged (4)
HWYL - located, symmetrically and inventively, in {jo}H{n} WY{c}L{if}. As you may have guessed, it's Welsh.

18 Society of Jesus welcomed by Virgin (traditionally) in place of worship (6)
MASJID - S.J. "welcomed" by MAID, to find another word for a mosque.

26 Scotsman’s son moves to opening, driven out by last of scary stories in tent (10)
SHAMIYANAH - take HAMISH, a Scotsman, and drive out his S (= son) as instructed with {scar}Y ANA. The tent is Indian or Persian.

28 Said what results from initial delay in attention (4)
EHED - take HEED [attention], and delay the first letter just a tad. Said "what?"

29 Shellfish porridge on leaves? That’s 100 yen up front (6)
CYPRIS - PRIS{on}, with C Y "up front". Cypris is a sobriquet of Aphrodite, so I'm imagining these bivalve crustaceans are quite dishy in some way.

5 Half of pay needed to make a crust (3)
SAL - SAL{ary}. Another word for "sial", the silica-alumina upper part of the earth's continental crust/

12 For locals, Syrian city is unlit, similar to headquarters (7)
DIMASHQ - DIM AS HQ [unlit | similar to | headquarters]. One must assume that we've been spelling Damascus wrong all these years...

25 Hope for good outcome with wife leaving Scottish court’s exits (5)
ISHES - {w}ISHES. The "liberty of going out", in Scots law, is an ish, ish.

27 Stand for cutlery etc and wash up (3)
NEF - reverse of a FEN, or marshy wash. This ornamental cutlery stand was "often in the shape of a ship", hence the word's similarity to "nave".
Collapse